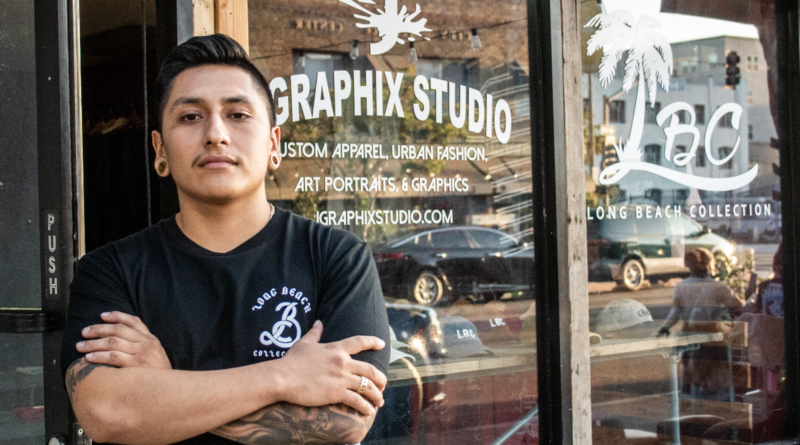 Recently expanded, John Ramirez’s J Graphix Studio provides in-house custom graphic design, silkscreen, vinyl and embroidery services. It is also home to Ramirez’s own apparel brand, the Long Beach Collection and this past June they celebrated the fifth year anniversary of being in business.

Differing from other Long Beach based clothing brands in regards to style, materials, neutral designs and the fact that his brand is more lifestyle, the Long Beach Collection also promotes all sides of Long Beach including East, West and North.

The journey was not easy and it took Ramirez seven years of determination and hard work to get where he is now.

Ramirez, now 25 years old, grew up in the Eastside of Long Beach on Locust and 16th Street, an area where gangs and racial tensions were very prevalent in the ’90s.

Having to look out for himself, some of that gang mentality influenced him for the earlier years of his life, choosing not to associate with a lot of people due to what was instilled in him growing up in that area.

It was at 17 years old when he realized he needed to seek an opportunity to advance himself and his family.

“I was gonna have my daughter, my mom was laid off, my dad had to leave to Mexico to wait for his papers. There was no income coming in and then my brother was in jail too so it was just all up to me at 17,” said Ramirez.

Without a resume or prior work experience, Ramirez went to Pacific Gateway’s Youth Opportunity Center seeking help. Here he was able to take classes, earning his work credentials and was assigned to work at the Spring Street Farm Project.

Under the direction of Jesse Frutos, Ramirez and other youth would cultivate and harvest crops, run the farm stand and care for a chicken coop. Days would extend up to 16 hours at times when the crops had to be taken to multiple farmer’s markets during the week.

“People looked at that like, ‘Oh, this guy’s working on a f—— farm’, you know like, at that age, people are usually working at any other retail store or whatever, I was 17, I was just like, I don’t care how I look,” said Ramirez.

While working on the farm, Ramirez was recruited by Darick J. Simpson, then executive director of LBCAP. Ramirez recalled Simpson approaching him and complimenting his work ethic.

“‘Damn man, you’re like the hardest working person in Long Beach’, he would always see me working like 16 hours, 14 hours, 12 hours,” Ramirez recalled.

Ramirez comes from a family of artists. His father and brother are tattoo artists and he himself was into drawing, painting and graffiti art. Enrolling in the graphic design/silkscreen class under “content expert” Ryan Bryant seemed like the perfect transition as it would give him an opportunity to wear his own designs.

In the silkscreen class, Ramirez learned to digitize his art and began learning graphic design. They were then taught to transfer them onto silk screen plates which were transferred onto shirts and after processing, became a complete product ready to sell.

Although LAMP was an after school program for some, it was more than that for Ramirez.

“To some LAMP was after an after school program, but to me it was what was going to feed my family,” said Ramirez.

Bryant, who owned a screen printing shop which featured his own surfer clothing brand, took Ramirez under his wing, inviting him to his own live printing shows, pop-up shops and industry events, showing him the possibilities of what silk screening and creating apparel could do.

“I was raised in a different era where we only associated with our people you know, LAMP and the farm helped me meet a lot of different people and be in a good route, that changed me and got me comfortable with myself, you know like, because I was very on the side and being a troublemaker, they made me grow up there,” Ramirez said.

Eventually he was hired by LBCAP and began producing their business cards, flyers, anything involving graphic design, including shirts for their after school programs. He was also still working on the farm and finishing up his last year of high school.

After the silk screen course ended, Ramirez was invited to another nonprofit which was coincidentally piloting its own program in micro-entrepreneurship where he was able to develop his 5 year plan.

Ramirez had already begun investing and buying in his own silk screen machines. However he wanted more time with his family and with the blessing of Jesse Frutos, his supervisor at the farm, Ramirez left.

In 2015, by the age of 20, Ramirez had saved enough money to sign off on his current storefront space at 404 E. 3rd Street in downtown Long Beach.

With support from his family and friends, Ramirez was able to fix and build his shop up from the inside. For the last five years business was doing great but like many others, was slowed down due to COVID-19.

The shop closed down for two months but with the property adjacent to him being up for sale, and his five year plan being complete, Ramirez couldn’t miss the opportunity of expansion.

Now there’s not only more storefront space for display, but there is also more workspace, providing higher efficiency rates for incoming orders to be completed and also providing the opportunity to recruit Christian Torres to join his team alongside Ramirez, long-time employee Fernando Gutierrez, Walter Jackson, Courtney Manning, and Juan Perez.

As for Ramirez’s next goals, he wants to continue growing his shop and hopes to collaborate and feature other local artists such as the RIOT brand, a black-owned apparel line who is also currently being featured in the store’s new expansion.

Success in business granted Ramirez and his family the chance to buy a house in Bixby Knolls, now his entire family including his father and brother who got out of jail and opened up their own tattoo shop, are reunited and have the chance to be a family again.

“My family is happy, I got my brother and my mom in the house, my kids are with them, enjoying them, to me this is living the American Dream, being your own boss, a homeowner,” said Ramirez.

Ramirez also emphasized that one should never forget where they came from but that they can always grow from it.

“Be proud of where you came from, you owe it to your parents to be better, they worked their a– off for you no matter what they did” Ramirez said.

He also hopes to come full circle and possibly open a nonprofit for teaching the youth skills just as LBCAP and LAMP had taught him.

“I want to be an example for my culture, I’m a brown, Hispanic, Mexican owner, with parents that migrated here. I’m gonna show that we’re more than just workers,” Ramirez said.

“I want to leave a legacy for my community, friends and family, that’s the end goal.”